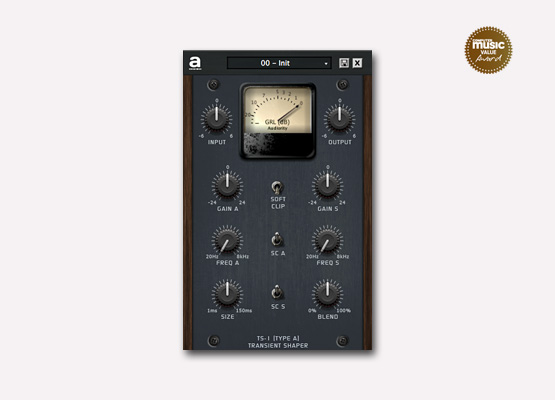 TS-1 is a multimode frequency dependent transient shaper designed to manage the attack and sustain of an incoming audio signal. Thanks to our “Compression by Saturation” concept, TS-1 works great to add warmth and punch to your drum tracks without losing dynamics.

TS-1 features two separate detection circuits for Attack and Sustain, whose signals can be filtered to improve the detection (SC filtering) or to color the processed audio. A soft clipping circuit will gently saturate and “compress” your signal, in a similar way to a tape saturation.

Starting with version 1.1, TS-1 now features two distinct modes named Type A and Type B. While Type A retains the original TS-1 algorithm, Type B is a brand new one featuring inverse envelope curves on negative gain values.

In demo mode the plug-in will output silence for 3 seconds every 30 seconds.