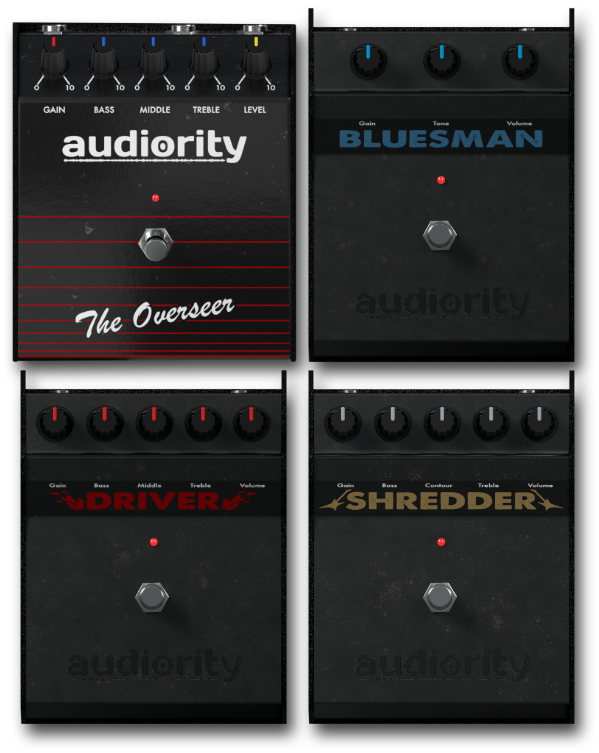 At the end of the '80s, Marshall® introduced the concept of an "Amp in a Box". They tried to reproduce the sound of their best selling tube amps in a portable format.

Their first product was The Guv'nor™, focused on replicating the drive tone of their Plexi™ and JCM800™ amps.

The British Tanks Collection brings to you a piece of the guitar effects history.

Current bundle version: 1.0 – Save over 40% compared to single products. All plugins are 64bit only. VST2, VST3, AU, AAX for Mac and PC. Click on each name above to check the product page and download demo versions.

THE BRITISH TANKS COLLECTION IN ACTION

*All product names used in this website (www.audiority.com) are trademarks of their respective owners, which are in no way associated or affiliated with Audiority. These trademarks of other manufacturers are used solely to identify the products of those manufacturers whose tones and sounds were studied during Audiority’s sound model development. Marshall, Lead 12, Valvestate, Plexi, JCM, Blues Breaker, Drive Master, Shred Master, Guv’nor are registered trademarks of Marshall Amplification Plc. Audiority™, The Bluesman™, The Driver™, The Overseer™, The Shredder™ are trademarks of Audiority Srls.
Add to cart